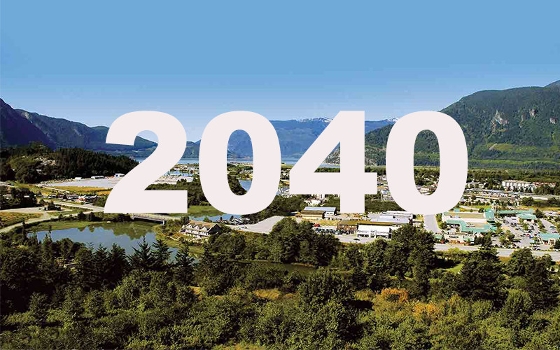 This Thursday the District of Squamish is holding a public visioning event where Squamish residents will come together and create a collective vision for 2040. This high level brain-storming session will filter into the Official Community Plan, the approved document paving the way for the vision, goals and objectives determining Squamish’s future. A lot can happen in 24 years, and although it may seem light-years away, the results of Thursday night’s meeting are the first step in shaping Squamish’s future. So what do you see for Squamish in 2040- 24 years from now?

A journey into the past can help reveal the future which lies ahead. Rewind back to 1992- 24 years ago. Squamish, most commonly recognized as the McDonalds on the way to Whistler, had a population of 11,000. The main industry was forestry and the largest employer was Interfor. The drive to both Vancouver and Whistler was along a windy double-lane highway, scenically stunning but alarming accident prone; the drive in those days took an additional 10-15 minutes in both directions. The cost of a 3 bedroom home in Garibaldi Highlands in 1992 was $155,000. That same house today costs $800,000, that’s a remarkable increase of 416 percent.

Squamish sure has changed a lot in 24 years. Gone are the days of the Bowling Alley on 2nd Ave and the brown, orange and beige Civic Centre. The Olympic boom saw the upgrade of the Sea to Sky Highway, big box stores like Walmart and Home Depot, and Canada’s first Liberal Arts University, Quest University which constructed a campus in Garibaldi Highlands in 2007.

As the rest of the Western world tumbled into a recession, Squamish continued to surge forward with the Sea to Sky Gondola and Squamish Valley Music Festival firmly establishing Squamish on the international stage. The New York Times recently ranked Squamish as one of the top 52 places to go in 2015 and the town’s population reached 17,000 in 2011, a 14.6 percent growth from the previous census in 2006.

No longer is Squamish just a pit-stop town on the way to Whistler or a bedroom community of Vancouver. People are moving to Squamish in droves because of what it offers, not only because of what it’s close to. The rock-climbing, mountain biking and wind-surfing are drivers for both locals and tourists. The demographic shift to young families and professionals has created a youthful and vibrant energy around the town. The new Ground-Up climbing centre plus a handful of fitness centres which have sprung up in the last year are a testament to the youthful and active community that forms that majority in Squamish.

The development boom in Squamish is transforming the landscape of the town. Downtown Squamish has been inundated with condo and townhome developments as has Dentville, the Northyards and Tantalus in Garibaldi Estates; there is no sign of this development boom stopping anytime soon. The Squamish Oceanfront Project is becoming a closer reality and developments in the Cheekeye Fan and Garibaldi at Squamish could soon come to fruition. The average home price has increased 62 percent in the last 5 years and the insatiable demand for life in Squamish is only curbed by the actual inventory of properties available for out of town buyers.

Things sure have changed in Squamish in the last 24 years. Imagining the town in another 24 seems like an impossible feat. If the population increases at the same rate it has been there could be a total of 26,000 people in 2040. That same three bedroom home in Garibaldi Highlands if increasing at the same rate will cost 3,328,000m in 24 years.

If you could create your ideal Squamish in 2040 what would it look like? Do you see tourism driving the economy? What type of jobs do you envision supporting the growth of the town? What type of parks, trails, and gathering areas would you like to see? What natural resources should be preserved? How would you address the current housing affordability as we move into the future?

Thursday night’s Public Visioning Event is your chance to participate in the creation of Squamish’s future. The event is taking place at the West Coast Railway Heritage Park between 6pm and 9pm. If you can’t make the event there is an online questionnaire available.  It’s is exciting times here in Squamish, and although I can’t predict what 2040 will look like, I don’t think the excitement will be slowing down anytime soon.