7 Reasons Why Squamish is an Awesome Place to Live 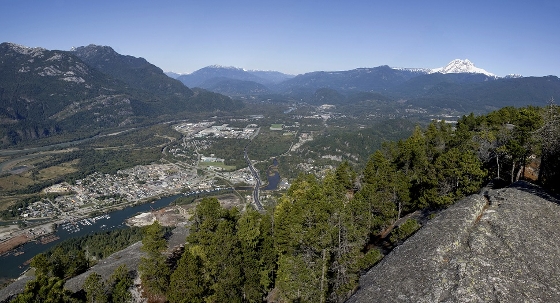 Squamish is quickly becoming one of the most sought after places to live.        Here’s why...

If you haven’t heard about the coastal town of Squamish, BC you must live on the other side of the world or under a rock. The New York Times recently rated Squamish as one of the top 52 places to go (in the world) and if that isn’t enough CNN declared Squamish as the mountain town to visit after the official opening of the town's Sea to Sky Gondola in 2014. With a population increase of 15% in only five years- young, educated and adventure driven people are flocking to Squamish and calling it home.

Being a resident and realtor in Squamish for over 25 years I have seen the town transform from a small community of barely 10,000 to a booming adventure hub of nearly 20,000. Squamish as a place to live is now more desireable then ever before; here are my top 7 Reasons Why Squamish is an Awesome Place to Live.

Squamish is situated in a Valley at the mouth of Howe Sound and is framed by stunning granite mountains. The iconic Stawamus Chief is the second largest granite monolith in the world attracting a plethora of mountain enthusiasts each year to climb, hike and explore. For those who enjoy being close to nature and love playing or pondering on mountains then Squamish is sure to inspire.

Pre-2010 Olympics the Sea to Sky Highway, which connects Vancouver to Whistler, underwent a 600 million dollar upgrade. Squamish has been reaping the rewards of this investment ever since and it is now easier than ever to travel from Squamish to Vancouver or Whistler; about 40 minutes on a good day. Situated in between one of the world’s best ski resorts and one of the world’s most liveable cities, can you imagine a better location?

The influx of young couples and professionals moving to Squamish has made it a great family-friendly town to raise children. The average age of the population in Squamish is 37 and in the last census (2012) there was a whopping 40% increase in kids from the census 6 years prior (BC average was 9%). The small town community, great school system, low rates of crime and proximity to nature make Squamish an ideal place to raise a family.

Squamish has been unofficially named the Recreation Capital of Canada due to the number of outdoor activities available. In the summer take your pick from wind surfing, kite boarding, rock climbing, mountain biking, sailing or hiking. In winter it’s only a 40 minute drive to Whistler for the best skiing and riding in the world or you can snow-shoe, cross country ski, skate or sled right in your own backyard. Brennan Park Leisure Centre has a great pool and ice-rink with loads of activities and there are plenty of community programs and facilities for art/culture, sports and culinary interests.

With four diverse and beautiful seasons, Squamish is a temperate oasis when it comes to weather. Yes, it does rain in Squamish however the rain is mostly concentrated in fall and winter (when the rest of the country is experiencing sub-zero temperatures). The rain keeps the town beautiful and green, it hardly ever gets below 0, and the summers offer the most spectacular sunny days in an amazing picturesque setting.

What has made Squamish so popular over the last few years is the number of professionals from Vancouver moving to Squamish to live and play while they do the easy commute to work during the week. It’s an obvious choice for many: A snail-paced commute through horrendous traffic to the suburbs of Greater Vancouver or a glorious drive on one of the most scenic highways in the world. In Squamish the living is easy, the play is exciting and the work is accessible.

Squamish is making a name for itself with big events such as the Squamish Valley Music Festival and the Test of Metal. Add to that the newly built Sea to Sky Gondola which has taken the area by storm attracting an increase in visitors to the region by 36% the year it opened (2014). If that’s not enough take a short drive to Whistler or Vancouver for your pick of world-class events and attractions.

So there you have it, 7 Reasons Why Squamish is an Awesome Place to Live. Come see it for yourself! Squamish is still affordable compared to Vancouver (but not for long!) If you can see yourself living in Squamish, then view the current properties on the market and arrange a personal tour of the town.